Weekend are a great way to relax and what better way than to go out on a weekend trip with family and friends to nearby destinations. There are plenty of such places near Tarakeswar which can be visited during holidays or during weekends. Here is a list of such places along with important tourist attractions at such places.


Visit the City of Joy Kolkata from Tarakeswar

Kolkata is a frequently visited place by the people of Tarakeswar as it is located at a close proximity to the town. The city of joy has several things to offer to the visitors. There are many sightseeing options as well as various activities that can be indulged into when here. Some of the famous places which can be visited when on a tour to Kolkata are Victoria Memorial, Birla Palnitariium, Marble Palace, Mother House, Prinsep Ghat, Rabindranath Tagore’s House, race Course, Science City, Swami Vivekananda House, Town hall, Vidyasagar Bridge, Writers Building, Shobabazar Rajbari and much more are some of the important places that can be visited. 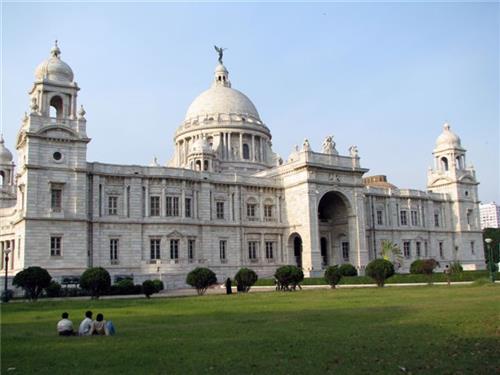 Victoria Memorial
Kolkata is a religious place and there is no dearth of religious places that can be visited when here. Belur math, Birla Temple, Dakhineshwar Kali Temple, ISKON Temple, Kalighat Kali Temple, Nakhoda mosque, St John's Church, St Paul's Church, Armenia Church are some of the places of religious importance and are visited by large number of people from all walks of life every day.
Apart from sightseeing options and places of religious importance Kolkata has several other options too. It has amusement park such as Nicco Park, Auquatica which are a great Place for family outing. Various parks with lot of activities have also been set up such as Eco Park in Rajarhat, Nolban, Rabindra Sarovar and the likes. Here activities such as boating, cycling is common. Such parks and gardens are very well maintained and is a great place to relax and enjoy the beauty all around.

Kolkata is a great shoppers paradise. Apart from malls selling various brands under one roof, there are other markets such as New market, Gariahat market, Hati Bagan which are known for cheap and good quality products. Kolkata has something for everybody. If not doing anything just a walk around park street or horse ride around Victoria Memorial or spending some good time sipping hot tea in earthen cups watching the Ganga is going to give you great memories. There is a charm about this city which will defiantly mesmerize you and give you some good time.


How to Reach Kolkata ?

There are innumerable trains plying between Tarakeswar and Kolkata. Buses also ply regularly. The distance is 61.9 approximately.

Explore the Land of Birbhum from Tarakeswar 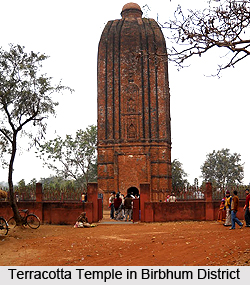 Birbhum is a famous tourist destination from Tarakeswar. The city has just the right combination of hills, plains and river lines. It also boasts of rich heritage, culture and has several places of religious importance too. Apart from the fact that it is home to world famous university, Viswa Bharati which was established by the great Rabindranath Tagore, the place also offer several other attractions too.
Santiniketan which is a small town in Birbhum district is world famous because it is the home town of Rabindranath Tagore and also it is the home town of Noble Prize winner Amartya Sen - the famous economist. Rabindranath Tagore had written many of his classics here. Tourist attractions here mostly center on the Viswa Bharti University and memories of Rabindranath Tagore. There are several paces in Santiniketan which are heritage places and have been preserved carefully in memories of some important events that had happen in the past. Some of such heritage places which are a must visit are Chahatimtala, Upasana Griha, Dehali, China Bhavana, Black House, Santiniketan Griha, Uttarayana, Shyamali, Udayana, Museum and Archive.

Santiniketan though can be visited all year round is specially popular for "Poush mela" that takes place during the month of January and also during "Dol Jatra" a festival which is played with colors usually during the month of march. During such time it is treat to watch the proceedings that usually takes place and the town bores a colorful look. There are several hotels and resorts which have come up for the comfort of the tourists who visit this town of Santiniketan quite often.

When visiting Santiniketan, visit to Sriniketan should not be missed either. Located just about 3 Km from the town of Santiniketan, it is basically a rural reconstruction which was established in the year 1922. It is a great place for those who love to shop as various traditional items which are a trademark of Birbhum region such as weaving katha embroidery, batik, pottery, dokra and such other stuffs are available. Rabindra Bhaban, Kala Bhavan, Uttarayan gardens are some of the famous tourists spot here.

Another famous tourist spot in Birbhum is Tarapith. This is a religious site where people from all over are seen to come and offer their prayers to Goddess Sati. It is a sacred and religious place and it is said that the eye ball of Goddess Sati had fallen here. Many are also of the option that Goddess Sati was worshipped by Sage Basistha at this place. It is a renowned place and is a must visit.

If wanting to experience the rich culture of the region Birbhum and also the rustic charm present here, Suri which is commonly pronounced as Suiri can be visited. Aromatic atmosphere, blissful ambience, rolling green farm and picturesque exquisiteness is what makes this place a great destination for holidaying with near and dear ones. The place boasts of rich cultural heritage of the bygone areas. One can see various ancient monuments here to prove such facts true.

When on a tour to Birbhum, one must not miss the visit to Ballabhpur Wildlife Sanctuary. Those who are explorers and in search of thrill, excitement, visiting Ballabhpur Wildlife Sanctuary is just the right choice for you. Also known by the name Deer Park, several wild animals such as spotted deer, black buck, and different variety of water birds, foxes, jackals and such other animals can be seen here. Safaris are conducted for the tourists.


How to Reach Birbhum ?

Being close to Tarakeswar it is an ideal weekend gateway and visitors can have a nice time when here. It can easily be reached by taking trains or by buses too. There are several railway station in Birbhum district and the one that is near to your destination of visit can be chosen to reach the place. Private cabs are also a common medium of transportation. It is located at a distance of 210 Km and takes about 4 hours 30 Minutes to reach.

Plan your Trip to Bankura from Tarakeswar

Bankura is also a place which has got various tourist destinations that can be of interests to tourists. Being an ancient city, you will get to witness several ancient architecture, handicrafts and the likes. Amongst the various places that can be visited the prominent ones are Bishnupur, Jairambati and Kamarpukur, Kalachand Temple, Mukutmanipur, Jhilimili, Susunia Hills and much more. Bishnupur is famous for Baluchari sarees and also for the terracotta temples with unique architecture. The detailed and brilliant terracotta works can still be witnessed today. The glorious past of the town is reflected in rich music, architecture and handicrafts such as weaving and pottery which are very famous here. Rajas belonging to the Malla dynasty ruled the town for several years and its history can be traced back to as far as 694 AD. 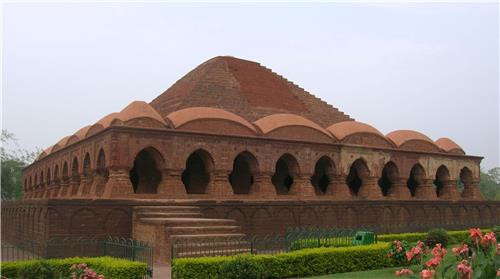 Rasmancha
Not so far from Bishnupur is Mukutmanipur. This place is often flocked by tourists to get a glimpse of the natural beauty that the place has to offer. The hilly landscape and the dam are the major attraction here. Jhilimii is also one such town in Bankura which offers spectacular, undisturbed and beautiful natural forests. When travelling from Ranibund to Jhilimili, the view on both the side of the road is amazing. There are forests with different verities of tress on both side of the road. Susunia Hills, Biharinath Hill and Sutan Forest are other such places which are admired for its natural beauty and can be visited for a rejuvenating experience.

Apart from natural and historical sites, Bankura has several places of religious importance too. Jairambati and Kamarpukur are religious places visited by many pilgrims throughout the year. It is the birth place of Sri Ramakrishna Pramahansa and Ma Saradamoui. Kalachand Temple is also a famous religious site which is popular for its Ekratna style.


How to Reach Bankura?

The close proximity of the place from Tarakeswar makes it an ideal destination for weekend gateways. Also the transportation to such places is quite frequent. Trains and buses are easily available and it takes less than 3 hours to cover the 119 Km from Tarakeswar to Bankura.

If you are someone who loves to get lost in the glorious bygone eras of Bengal, then visit to Murshidabad is just the right choice for you. There are several structures in Murshidabad which are of historical significance. One can visit the palaces which were built by the royal family who had settled here many years back. Amongst the several palaces that can be seen her, the most famous one being Hazarduari. The meaning of the name Hazarduari is thousand doors. True to its name, the palace has thousand doors. Out of which 900 are real. The palace which was built in European style is a three stored building with magnificent architecture. Previously used as a residence of the Nawabs it has presently being converted into a museums with exquisite collection of paintings, armor, portraits of the royal family and several other valuables. A visit to this palace is must when in Murshidabad. 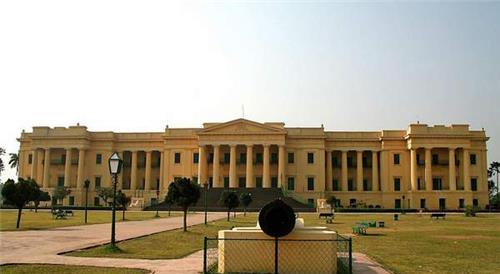 Hazarduari Palace
Wasef Manzil, Katgola Palace, Nasipur Palace can also be visited to get a feeling of the glorious bygone eras. There are several Mosques in Murshidabad. The Imambara which is the largest Mosque in West Bengal was built by Feradun Jah who was the son of Humayun Jah. The Imambara which was built in the year 1874 AD is quite huge but took just 11 months to complete. Katra Mosque and Footi mosque are other two mosques which can also be visited to get a glimpse of the unique architecture. Jafarganj Cemetery and Khosh Bagh are places where the grave of various members of the royal family lie. The crematories are quite well maintained and can be visited when here. Jahankosha Canon which is 16880 lb in weight and 17.5 ft long was built in 17th century and is a treat to the eyes.


How to Reach Murshidabad ?

There are several trains that ply between the two stations. Murshidabad is at a distance of 195 Km. One can also avail bus and private cars and reach Murshidabad within 3 hours.

A visit to such places is bound to give you great time and wonderful memories. The trips are also going to keep you refreshed and stress free. Pack your bags to have a wonderful experience visiting the above places.